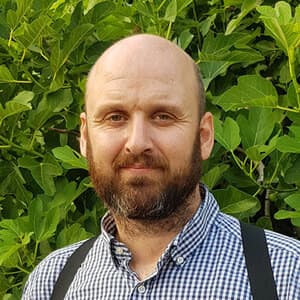 "After 1 month I am symptom and medication free."

“My initial symptom was a pain to the left of the breastbone and started about 18 years ago whilst I was in university trying to drink my own body weight each week. I was prescribed PPIs and they helped the symptoms for many years although they only mask the condition allowing it to develop unchecked as they clearly don’t stop the reflux they just raise the PH of the regurgitation. It developed into my oesophagus being sore most of the time and I would have severe flare ups maybe 3 or 4 times a year regardless of the medication. It later developed to the point that I would take a cold drink normally milk being a natural alkaline, and then I would sit down or recline slightly and due to the increased intra abdominal pressure I would feel the cool sensation of the fluid return to the back of my throat. The worse symptom I experienced was maybe 2 or 3 times I awoke in the middle of the night not being able to breathe as the acid had washed back up into my lungs, it was at this juncture that I realised surgical intervention was necessary.”

“I specifically asked my GP about the LINX® procedure after doing a lot of research myself and explored the channel of NHS funding. This came back as a resounding NO and I was referred to a Gastro specialist only to receive the typical institutionalised attitude that PPIs were the answer even after questioning him about all the issues with long term side effects such as; stomach cancer, osteoporosis, increased risk of heart attacks, SIBO, malabsorption, pneumonia in the elderly, and C. Diff infections and other vulnerabilities due to reduced acid as the first line of defence. I received this rather contrived and conceited answer that many patients take PPIs long term and surgery is the absolute last resort. This advice turned out to be contrary to the latest NICE guidelines that the only way to cure reflux is through surgical intervention. I then found Mr Boyle’s contact details as the closest clinic to perform the LINX® procedure.”

“I found Mr Boyle to be very professional, concise, often quite abrupt but very understanding and friendly indeed.”

“The treatment was very succinct, the Spire in Tunbridge Wells were very professional and all the staff were very friendly and courteous. The only pain immediately after the surgery that I can really mention was a sharp inexorable pain at the tip of my left shoulder. I was warned of this prior to surgery and told that this was down to residual CO2 in the cavity which irritates the nerves.”

“Initially in the first few days it was a little uncomfortable to walk but this resolved itself after about 5 days. In the first couple of days it was initially a little difficult to swallow which I believe was mostly due to years of reflux badly impeding my swallowing function resulting in very low swallowing pressures. Mr Boyle advised me to go back to eating normally as quickly as possible, but I took this a bit further and immediately ate very unforgiving foods like steak and kidney pie and cold leftover dry roast gammon and between about 7 days post op and about a month I did have a few painful swallowing episodes where the food got stuck for a bit. This was partially down to me forgetting that I have the device in place now, not chewing my food properly, not taking the time for the food to go down but also mostly down to my very weak swallowing pressure. It would appear certainly in my case, just like any muscle in the body that is exercised with increased force, the oesophagus increases in strength and function the harder it is worked with unforgiving foods. After 1 month I am symptom and medication free and have only experienced a handful of very minor swallowing incidents.”

“I have been PPI free from 3 days prior and did get a bit of acid resurgence for maybe a month or 2 after the op due to 18 years on PPIs, but this has since resolved itself. I feel like a new man able to eat normally any time of day and night, burp frequently and have had what is easily described as only 2 or 3 reflux episodes since the op compared to 30 a day! I still avoid pasta, caffeine and limit alcohol but most of this, I think, is down to a bit of SIBO from long term PPI ‘abuse’ so hopefully my digestive tract will heal itself over time and return to normal.”

“Yes definitely, shovelling PPIs down your throat all your life is only in the interest of the pharmaceutical companies to line their own pockets and it doesn’t solve the problem only mask the symptoms.”

“Yes, hopefully the operation can include, in the future, the very cheap simple solution to use a warm saline flush to evacuate the residual CO2 from the cavity prior to closure as there is evidence that this hugely relieves the irritation and post-operative pain.”