The procedure that is transforming reflux surgery and bringing immediate and long term relief to tens of thousands of people.

The LINX® System is designed to reproduce the physiological valve at the bottom of the oesophagus. It is a small, flexible band of interlinked titanium beads with magnetic cores that helps create a barrier to the reflux of acid and bile. The LINX® System is placed around the oesophagus just above the stomach during a laparoscopic or “keyhole” surgery, which is generally completed in less than an hour. 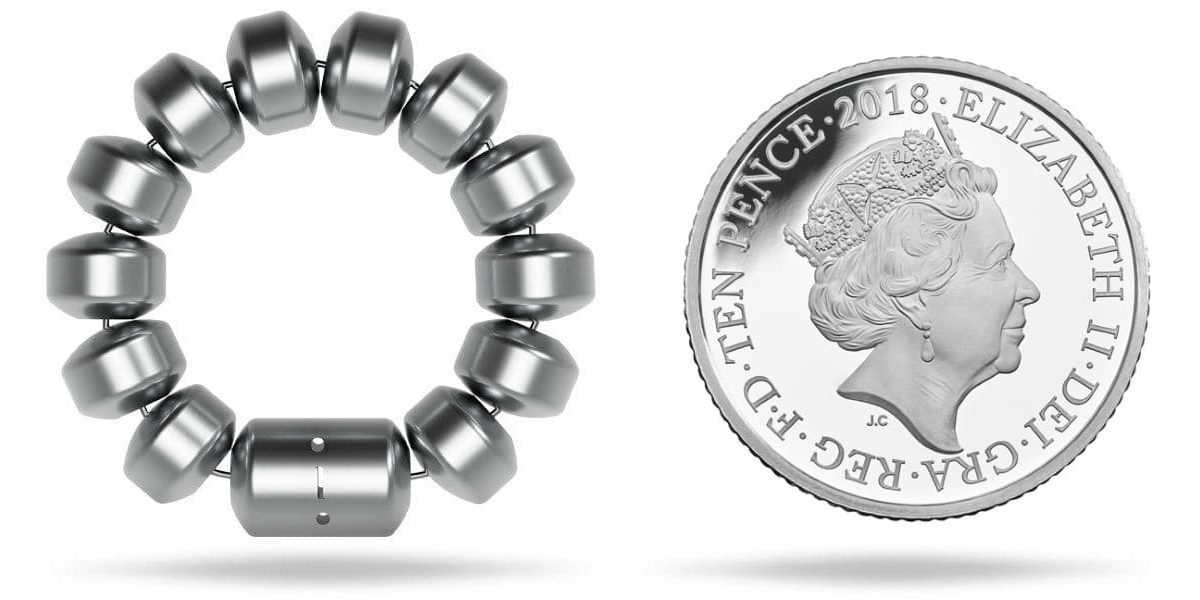 When the LINX® System is in place, swallowing forces temporarily break the magnetic bond to allow food and drink to pass normally through the Lower Oesophageal Sphincter (LOS). The magnets then close the LOS immediately after swallowing to restore the body’s natural barrier to the reflux of acid and bile.

There have now been around 40,000 operations worldwide and the results are very encouraging. LINX® has been shown to work very effectively to stop reflux symptoms. As a minimally invasive procedure, it is considered safe and has fewer associated side effects than fundoplication operations (fundoplication has a 5-10% revision rate within 5 years due to technical failure or recurrent symptoms). Patients recover rapidly from the operation.

To see how LINX® surgery is performed, you can watch surgery footage on our YouTube channel.

There have now been several research studies published which have looked at the safety and efficacy of LINX® up to five years following surgery. These have consistently shown the following:

The LINX® implant results in pH normalisation, an improved quality of life, and complete cessation of regular PPI (Proton Pump Inhibitor) in the majority of patients. The ability to belch and vomit is LINX®maintained after the implantation of LINX®, and post operative moderate to severe gas-bloat is uncommon. When compared with laparoscopic fundoplication, rates of success in alleviating GORD (Gastro Oesophageal Reflux Disease) symptoms and dysphagia are similar following the LINX® procedure. Bloating side effects are lower. Longer-term follow up data demonstrates that the LINX® management System is effective in the management of GORD (Gastro Oesophageal Reflux Disease).

Why people choose RefluxUK for their LINX® surgery

RefluxUK has more experience of LINX® than any other provider. Our Medical Director, and one of our surgeons, Mr Nick Boyle, has the largest experience of any UK surgeon and has implanted more than 200 LINX® devices. Cases are reviewed by our own reflux multi-disciplinary team. This ensures every case is individually reviewed. We are the UK's only clinic that specialises in private reflux patients and we publish our outcomes.


What Are the Side Effects?

Side effects following the LINX® System procedure are minimal and generally resolve over time.

Does the effect last?

Studies have indicated that the LINX® may be more durable than the fundoplication but definitive evidence is currently lacking.

What About Recovery Following Surgery?

Surgery to insert the LINX® system is less invasive than fundoplication. The majority of patients can leave hospital on the same day as surgery if they wish to.

The LINX® System starts to work as soon as it is in place. Patients should be able to resume a normal diet within a few hours of surgery and can usually return to normal activities in less than a week.

What Are the Possible Complications?

While all surgery carries the risk of complications the LINX® System procedure does not involve any changes to the anatomy of the stomach and is fully and easily removable. The first LINX® Reflux Management System procedure took place in 2007. In the time that the procedure has been performed there have been no reports of the device migrating from the site of implantation.

Complications are rare, they include;

The LINX® removal rate is 2-3% globally but less than 1% in RefluxUK patients, removal is straightforward if necessary with no change to the patients anatomy. LINX® removal is usually because of persistent dysphagia or lack of effect.

Removal is performed during a keyhole surgery and is usually straightforward.

Erosion of the device into the oesphagus has been reported but seems to be a far smaller risk than initially feared. The evidence suggests this can occur in between 1 in 750 and 1 in 1000 patients. When it does occur the LINX® can be removed with another minimally invasive procedure and seems to cause no long term damage.