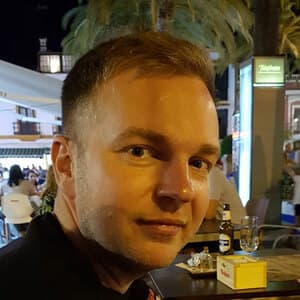 "I have had no heartburn or reflux since surgery and have found I can eat and drink anything."

I suffered from heart burn for most of my adult life particularly in the last 6 to 7 years where my symptoms worsened. At first I suffered acid reflux two to three times a week however over time this became a daily occurence. Following a visit to my GP I started taking Omeprazol 20mg daily however later this became ineffective. This remained the case even when increasing the dosage to 60mg and even found drinking water could give me heartburn. In addition I found it hard to sleep due to my reflux and in the 6 months leading to surgery was sick on a few occasions despite taking the medication. I had to change my diet to help reduce the acid reflux as much as possible by avoiding fatty foods, citrus, chocolate, biscuits and crisps etc but as previously stated even the most basic of foods like salads would aggravate my symptoms.

My father got oesophageal cancer and his surgeon urged any of his children with reflux symptoms to get checked out. Having seen what my father went through following surgery to remove what was left of the cancer, in conjunction with my symptoms pushed me to see a specialist.

I considered surgery through the NHS but was paying for private health care and wanted to speak to a specialist. I met Mr Boyle through this consultation and it was Mr Boyle who explained all of my options thoroughly. Mr Boyle stated that he can conduct several tests to make sure I am eligible for surgery. It is my understanding that NHS options were not permanent ‘fixes’ to my Hiatus Hernia and would only resolve the issue for 4 to 6 years and even this was not guaranteed. With my only real options being LINX® or Omeprazol which was not greatly effective I felt I needed to proceed with surgery.

Mr Boyle struck me as extremely professional and had a fantastic understanding of his field. Mr Boyle did not use scientific jargon to ensure I understood what he was saying. All my options were discussed in great depth and I felt as though I could take as long as I needed asking questions, which again were all answered in depth.

I was extremely nervous about the surgery despite the process being explained to me in great depth, especially having never been put under anesthetic before. Again, I found the process extremely professional and could not have been dealt with any better in terms of my care before, during (as far as I aware) and after surgery. The after care has been fantastic and I was fully informed what to expect in the weeks and months following surgery.

Under Mr Boyle’s care I had an endoscopy which confirmed I has a minor case of Barrett’s Oesophagus.

Immediately after surgery I was in no pain at all whilst everything wore off. I was encouraged to eat and drink normally as soon as possible after surgery to assist in my recover and not to restrict the LINX® system with scar tissue. 5-6 months after surgery I am really reaping the benefits of this. The first few months after surgery I found I had to drink a lot of water prior and during eating any food to assist swallowing. I still found swallowing very uncomfortable at times with foods such as dry lumpy meats without sauce like chicken. I am not at 5-6 months after surgery and in the main can eat normally without great issue but still drink water prior and during eating as a precaution. I have the very occasional flare up but again this is mostly due to me eating too fast without water.

I found in the few months following surgery that as I was eating the food was trying to go down but air was trying to come up leading to quite a lot of pain. I had no pain from the stitches though. This has now stopped almost completely.

I have had no heartburn or reflux since surgery and have found I can eat and drink anything including fizzy liquids like sparkling water etc.

I feel so much better for having the surgery, I have not had any issues with heartburn or regurgitation since surgery and cannot thank Mr Boyle and his team enough for what they have done for me. I recently had my check up and explained I can now eat normally with only the occasional issue. I still must eat slowly, drink water prior and during eating but prefer eating this way. Since surgery I have lost one and a half stone in weight however this appears to be slowing as my body settles.

Yes, my symptoms were extreme and it has changed my life. My father’s oesophageal cancer was caused by Barrett’s Oesophagus cells. He is now fully in remission however I do feel the surgery has greatly reduced the chances of me getting similar later in life. This alone makes the surgery well worth it, however the changes it has brought to my life are truly brilliant and I have never looked back. In addition I no longer take any form of medication for my stomach which again can only be a good thing for my other organs, especially as I had not considered the long term effect this may have.

At the very beginning of my first few consultations I would liked to have spoken to someone who had been through the surgery. I feel as though this would have perhaps put my mind at ease and would further show me what I was getting myself in for in the long term and during recover.

In addition, in my last consultation with Mr Boyle I expressed it appears since surgery I am unable to be sick (which has occured on two occasions - perhaps of my own doing) Mr Boyle believes this is coincidence and I would in fact be able to be sick if required however this is yet to be proven. I think it is something worth noting and informing future patients of as a precaution.

Lastly, once again, I truly cannot thank Mr Boyle, the other staff, surgeons, nurses and anyone else involved in my surgery and aftercare enough for what they have done to me. If any future patients wanted to speak to someone who has gone through the process I would gladly accommodate to put their mind at ease.